ANDREW WEATHERALL
"I've not got a great deal to say about it, but then again I might have, who knows?” chuckles Andrew Weatherall down the phone, quite wrongly, in his slightly whiny Windsor accent. We’re talking about food.

Having been “unceremoniously” kicked out of the family home aged 18, young Weatherall soon realised it was cheaper to buy meat and veg than it was to always eat takeaways. Out of necessity, he taught himself to cook, but is still "a big fan of the Colonel."

“I don't have a signature dish. Nothing spectacular. Not duck in a reduction of its own tears,” he says, coughing on his first spliff of the day. “But I do a very, very good prawn and crab linguine, and my roast spud work is up there with some of the best.” After saying he also dines out at some of London’s finer establishments a couple of times a month, he agrees he likes his food like he likes his art—both high and low—then proves it by detailing the KFC gravy test.

“The thing to do is take a single chip, stand it in the gravy, and if it stands dead upright and doesn't move, it's too stodgy. If it falls over, it's too liquidy. If it tilts one way a few degrees, that’s the perfect gravy right here.”

After a run down of the finest chippies in London (Hoxton’s Simply the Best Fish Bar, he reckons) and a discussion about how England’s national dish is actually Jewish and Portuguese in origin, he wonders aloud. “What does being British mean?”

For many people, Weatherall himself is quintessentially British. His dress is a mix of Edwardian outlaw and stand-up gent in tailor-made tweed suits (though American workwear and heavyweight Japanese denim also feature in his wardrobe.) His music also brings the two great British traditions of rock music and acid house closer together than anyone else has managed. On top of that, his often evocative track titles and lyrical references are quaintly poetic while effortlessly evoking English literary greats like John Betjeman.

In conversation, Weatherall is a colourful raconteur. He has a quick knack for recall that means he can quote Voltaire one minute then flip into a story about snorting coke with Primal Scream’s Bobby Gillespie the next. He rarely pauses for thought, but his sentences are as eloquent as anything most people could write with hours of contemplation. As well read as he is (“I’m not religious so I go to great literature and history books to find stories that help me make sense of human existence,”) he’s also keen to joke, happy to call ten-a-penny festival promoters “cunts” and discuss using mushy peas as "chip lubricants." If you see him on a bus in Dalston, as did a friend recently, he’ll happily engage.

“I'm not a tortured soul or anything. All the things I hold dear you could file under, ‘don't be a nobhead’,” he says. “Just go about your life and try and be nice to people. We're in an arseholes-are-winning phase at the moment. But the balance will be redressed.”

One thing he happily discusses redressing is his drug use. He’s spoken before about being on top of a hill, overlooking London, tripping on acid and thinking he was controlling the thunder above him with the staff in his hand. But no more. He isn't an “I’ve given up merchant,” because they can be “self-righteous,” and it forces people to sneak off to do drugs in the toilet, which makes the act “transgressive” and therefore appealing once more. He just says no thanks.

“There was a turning point where I had to make a decision about ten years ago and it’s like, ‘do you enjoy snorting cocaine, or do you enjoy making art more?’” He decided the feeling he gets from making art is “better than any drug known to mankind.” The thrill of a successful live show or DJ gig he also says is a mix of relief, celebration and transcendence, as well as a rather heavy psychic burden.

“That's why Shane MacGowan looks the way he does. He has a million peoples' thwarted Celtic dreams being projected onto him. Everyone wants to be the rebel poet but they have to get up and go work in the bank in the morning, so they live out their vicarious dreams of a renegade existence through pop stars.”

He goes on to explain why people get upset when their heroes sell out. “It’s because they’ve already sold out themselves, and were living vicariously through these people who were so-called ‘keeping-it-real,’ so it sort of pisses on their own dreams.”

As sure as you can be of anything in 2017, you can be sure that Weatherall will never sell out. Even after producing the era-defining, first ever Mercury Prize winning album Screamadelica by Primal Scream in 1991, he rejected the many offers of remix work because the bands asking weren't the sorts to hang out in clubs, so why would they want/should they get a rave remix. 26 years after the release of that album, Weatherall is as uncompromising as ever and remains resolutely in the shadows. Musically, he is still “ploughing the same furrow as ever,” not least on his latest solo long player, Qualia. It has the same underlying sense of groove, rhythm, chord progression and structure that all his work does, from Two Lone Swordsman to The Asphodells. The only thing that's changed, he reckons, is the gear available to him in the studio.

"There is still a naivety to it ‘cause I’m a bit of a three-chords-on-the-piano-and-ask-someone-to-play-it-better kinda merchant. I’ve never claimed to be a great musician. I’m not a technical studio whizz kid. But I’m still firing off ideas left, right and centre. Most of them are terribly naive, but that’s the fun.”

The album is a chugging affair that never tops “the dizzy heights of 120bpm” and is coated in cosmic effects and filthy, low-slung guitar licks. It was informed by him reading Nobel Prize winning French author Patrick Modrian. He’s a writer with a largely homogenised body of work that came into the wider English consciousness after that prize in 2014, and is about finding oneself and one's identity by looking backwards.

“I’m 54, and there are big gaps in my story. Sometimes it’s like looking back at another person's life. Some of the stories I tell, sometimes I think, ‘did it really happen like that?’ I’ve just retold it and turned it into a better story than the actual event itself, and a lot of Modiano's work is about that selective memory. It’s fascinating.”

“Now, because of camera phones, and Facebook, everything is being documented. There is no uncertainty anymore, there is no room for myths and storytelling ‘cause people will say this happened then someone will go 'oh no, look, there’s this picture here and you weren't there or that didn't happen’ or whatever. That’s what I find fascinating; that kind of myth making and storytelling of everyday life. We always needed that to make sense of our life. That’s why we have religion.” 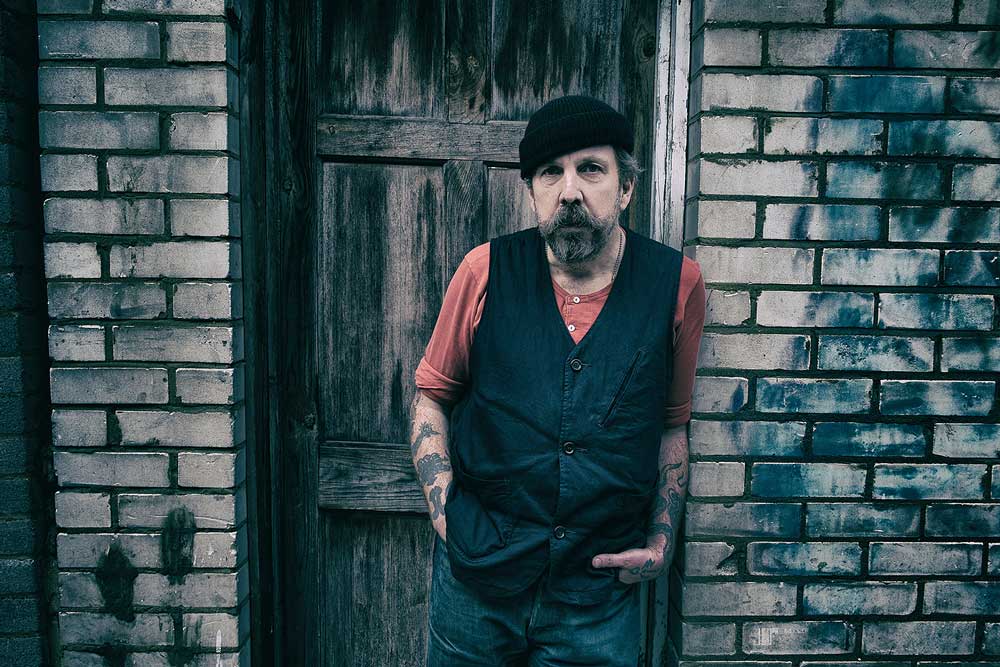 He says that, musically, he isn't nostalgic, he doesn’t look back through his own work, but often hears common threads. “I can empathise with nostalgia, but I’m doing a job I love. I don't need to look back. With a lot of people—especially in club culture, which happens between the age of 18, 30 at a push, maybe 25—at that point, for one reason or another, conformity has to take place. A child arrives or something happens so when times are tough and when they're not enjoying their current existence, that’s what people go back to—those songs. It’s that Proustian thing of hearing a song and the memories coming flooding back. That’s fine, if that’s what gets you through the night. It’s less damaging than religion, I think.”

Religion doesn't play a part in his life, but Weatherall is quick to draw parallels with club culture. While some people go to church and sing hymns in a place with stained glass windows and singing, “it’s the same as we do at an acid house; we have the same urge to transcend and find out what it is to be human, to find the core of yourself.”

On December 9th, he will link with friend of 20 years and A Love From Outer Space partner Sean Johnston to play at The Warehouse Project, which is "a commercial enterprise that does it right" and is "about the music, not just ticking boxes". They work as a DJ duo because “we know what each other listens to, not just plays in the club,” he says, before getting back to a disco being not just a disco, but “a ceremony, a ritual. I try to play up to that sonically with the rhythms and sounds I play, because drums are at the heart of what it is to be alive.”

In the last two years, he has produced 60 new tracks. Some made the album, others have gone “elsewhere,” including one remix for Liam Gallagher that is “Larry Heard-esque.” These are the latest additions to a discography that already has nearly 1000 credits and reaches back to 1989. He puts his on-going drive down to DJ gigs which often mean he can't wait to get to the studio on Monday. But also the “gnostic experience” and “connection to the divine” that is visiting art galleries and seeing the texture of paint on canvas, as well as reading, and how it “opens up certain imaginational pathways” in his brain.

“I’m still a massive devourer of music. Everyday I put a track or album in a file marked, metaphorically, ‘why the fuck have I never heard this before?’ It’s still a magical wonderland with new things to be discovered, and that’s what spurs me on. Or maybe my enthusiasm is actually increasing ‘cause I know there is so much art and literature and so little time left. Maybe I'm on a big old binge before I end up in a Swiss clinic in a haze of morphine.”

Andrew Weatherall returns to The Warehouse Project as part of The Chemical Brothers' headline show, alongside Sean Johnston. SOLD OUT.